My Review of Slime Night by William Pauley 3

I’ve read a couple books by William Pauley 3 and so far I’ve enjoyed each one. Last year he gave out a couple of his shorter ones to gain some reviews. Slime Night was one of those books, and I finally got around to reading it.

This book is a throwback to most anyone who grew up in the 80’s and maybe early 90’s. It’s the story of a couple of high school kids who battle over the love of a girl via pinball. The girl is the school slut, but our two boys may be the only ones who’ve never done anything with her. Pretty much if I said anything else about the story I would be spoiling something for a potential reader.

Slime Night is really short but it’s well written and entertaining. One could easily read it in a sitting. Pauley manages to cram a lot of character development in such a short span. It’s also full of interesting pinball information.

Though it still has the WP3 feel, it doesn’t have the weirdness and bizarre aspects he’s known for. I’m not saying it’s completely bizarre free, but it’s just not at the level one may expect from reading his other books. And that’s not a bad thing at all, sometimes it’s nice to see a weirdo author you like changing it up a bit.

My Review of William Pauley 3’s The Brothers Crunk 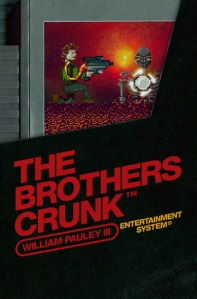 This has been the first book I’ve read by William Pauley 3 but it will not be the last. This book is described as an 8 bit Fack-It-All adventure, and it definitely is an adventure. It will take you to some weird and very interesting places. Page after page you will not know where you are headed, but believe me you will still continue on with the journey, and it is worth it.
The cover of The Brothers Crunk may be one of the best book covers I’ve ever seen. It looks like an old school Nintendo game, complete with the black plastic sleeve, simple yet extremely effective. It was the first thing that put this book on my radar. It should be noted that the cover was done by Brandon Duncan who has created many notable covers for books by authors like Andersen Prunty and D. Harlan Wilson.
Set in a post-apocalyptic Japan, TBC is the story of brothers Divey and Reynold who are traveling brackfas burrito salesmen. After a wreck in the desert that costs them their van, Divey comes across what amounts to part of a metal skeleton. This is where the story really takes off into uncharted territories. An attack from some wasp women ends with the awakening of the cyborg Vandeboom and the real beginning of the adventure that has Reynold searching for his missing brother. Throughout this you will get plenty of Nintendo references, from old controllers to games, most will remember from childhood.
I’ve read that this book is set in the same universe as another book by William Pauley 3, Doom Magnetic, and may have ties to it. I am looking forward to reading that book next. I was definitely impressed with my first foray into the odd mind of Pauley. He has the ability to create humorous and interesting characters, throw them into a completely absurd world and craft a uniquely believable story.

By it here The Brothers Crunk on Amazon

Worlds of the Surreal and the Bizarre

The Casual Way to Discuss Movies

Everything about Books and Reading

The man your librarian warned you about...