My Review of Brian Keene’s Entombed

I’ve read a few of Brian Keene’s books, enough that I can start picking favorites. One of those favorites of mine is his zombie novel Dead Sea. I thought it was a great read and he brought some unique ideas he brought to the zombie genre. And it was bleak, very bleak. Not too long after I read Dead Sea Keene announced a sequel, Entombed. I was excited, it was said to be not so much a sequel as another book set in that world. That sounded like a winner to me, I was ready for it. It took awhile for me to get a hold of it. Originally it was released as a lettered edition hardcover and limited edition hardcover. As much as I wanted to read it I just can’t afford limited editions. So I was thankful when Deadite re-released it last year.
Set in a world where the disease Hamlin’s Revenge has turned most of the population into zombies. Entombed tells the story of a small group of survivors that have locked themselves away in a former military bunker. It provides plenty of protection from the zombies, but as supplies start to run out and under the reign of one man’s self imposed leadership things turn ugly. There’s very little zombie action in this one, mainly in flashbacks to what brought the survivors to the bunker, but there is plenty of violence. Personally I thought this was one of Keene’s gorier books.
I’ve often said that what makes Brian Keene stand out as a writer to me is the characters he creates. In Entombed we see main character Peter as he goes to a very dark place inside himself in able to do the things he feels he needs to in order to survive. We are privy to his internal struggles, such as is he doing what he does to survive, or has it become something else. This book shows us that sometimes the scary stuff has nothing to with monsters or zombies, but can come from the people around you. Or inside yourself.
I started out saying that Dead Sea is one of my favorite Keene novels, and I think Entombed ranks pretty close to it. Though not as great as Dead Sea, it is still a very good read. Being that this is one of his later books, it goes to show that Brian Keene isn’t slowing down or getting soft, with Entombed it almost seems the opposite is in order.

By it here Entombed

Lehorn’s Hollow is a combination of Brian Keene’s books Dark Hollow and the follow up Ghost Walk put out by the Science Fiction Book Club. I picked this up at a flee market while on vacation because I thought it was cool to have both books collected together and because I hadn’t read either book yet. And it was like three bucks. I don’t know if you can still get this anywhere other than used book stores or Ebay, but Deadite Press has Released a new edition of Dark Hollow and will be releasing Ghost Walk very soon. I am breaking my review up as separate books.

Dark Hollow
I got into reading Brian Keene’s books after he left Leisure, and didn’t have an opportunity to pick up all of his books before they left the shelves and was in limbo for a time. But I started following his site and waited to see what was to become of his back catalog. While I was waiting it was announced that there was to be a movie filmed of Dark Hollow, and to raise money for it they were selling shirts with the image of the book cover printed on it. Being the good fan that I am I purchased myself a shirt and proudly wore/wear it, even though I felt a little funny wearing a shirt for a book I hadn’t yet read. Maybe I’m just weird like that, it certainly didn’t stop me, though. Anyway, I no longer have to feel funny about it, finally.
Here we meet writer Adam Senft, who I couldn’t stop picturing as Brian Keene himself. While out walking his dog, Big Steve, in the forest near his home he stumbles upon a fairly out-of-the ordinary scene. It’s not a spoiler to say it involves a Satyr, a half human half goat creature, like Pan. The town is affected by the strange music the goat man plays, and Adam takes it upon himself to try to rid his town of this evil.
It will be noticeable to anyone who has read a lot of Keene’s work that this is one of his earlier books, but any short comings from the writing stand point are easily over looked. The concept of using a writer as ones protagonist is nothing new, but Brian does an excellent job with Adam. He creates a likeable, real character with down to earth friends and relatable problems. With the exception of the Satyr of course.
This was the first book of Keene’s to introduce me to pow wow. I don’t know how much of what he put into this book is real or made up, but he has me convinced he is a master at the craft.
Also spread throughout this novel are neat little tie -ins with others of Keene’s work. Some are not real blatant, but some are. I always enjoy how Brian incorporates different things throughout his stories, creating his own huge universe.
Overall I really enjoyed this book. I believe it maybe one of Keene’s best as far as his characterization and storytelling go, and I didn’t want to leave Adam’s town. Luckily there is a sequel with Ghost Walk. 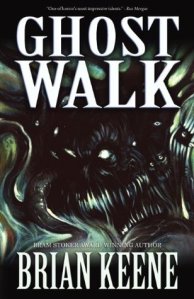 Ghost Walk
Jumping straight into Ghost Walk after reading Dark Hollow may not have been the wisest choice. With the characters from Dark Hollow still fresh in my mind I opened G.W. and wondered ‘Who are these people?’ Obviously Ghost Walk does not pick up from where D.H. left off like it’s the next day, ala the original two Halloweens. Instead it picks up five years later and introduces us to Ken Ripple, the owner of a local haunted attraction, The Ghost Walk. I had a hard time getting into this book at first, I just don’t think I was ready to be introduced to new characters and a new situation, in my mind I wanted to continue on with Adam and his adventures. But I persisted, and before I knew it I was sucked into this new yet familiar world.
Something has awakened in Lehorn’s Hollow as we lead up to the opening of The Ghost Walk haunted attraction. In customary horror fashion people go missing but are assumed elsewhere, and the work on The Ghost Walk goes right on schedule to ensure it opens on time. Here we are introduced to Ex-Amish Magus Levi Stoltzfus. Levi’s character has become pretty popular within Brian Keenes fandom, and in this book we get a good taste of what this guy’s all about.
Levi teams with reporter Maria Nasr and together they recruit Adam Senft to try and stop the evil in Lehorn’s Hollow before it’s too late. I don’t want to spoil anything for potential readers, there are obvious changes to Adam, it’s been a few years and he’s been through some stuff, but past that his character didn’t seem the same to me. I didn’t care about his character like I did in Dark Hollow.
Overall this book was decent. Not one of my favorites from Keene, but I would recommend reading it for Levi’s character if nothing else. But if you’re a big fan of Keene’s you definitely won’t be disappointed with the tie-ins to other books that he usually does.

Worlds of the Surreal and the Bizarre

The Casual Way to Discuss Movies

Everything about Books and Reading

The man your librarian warned you about...